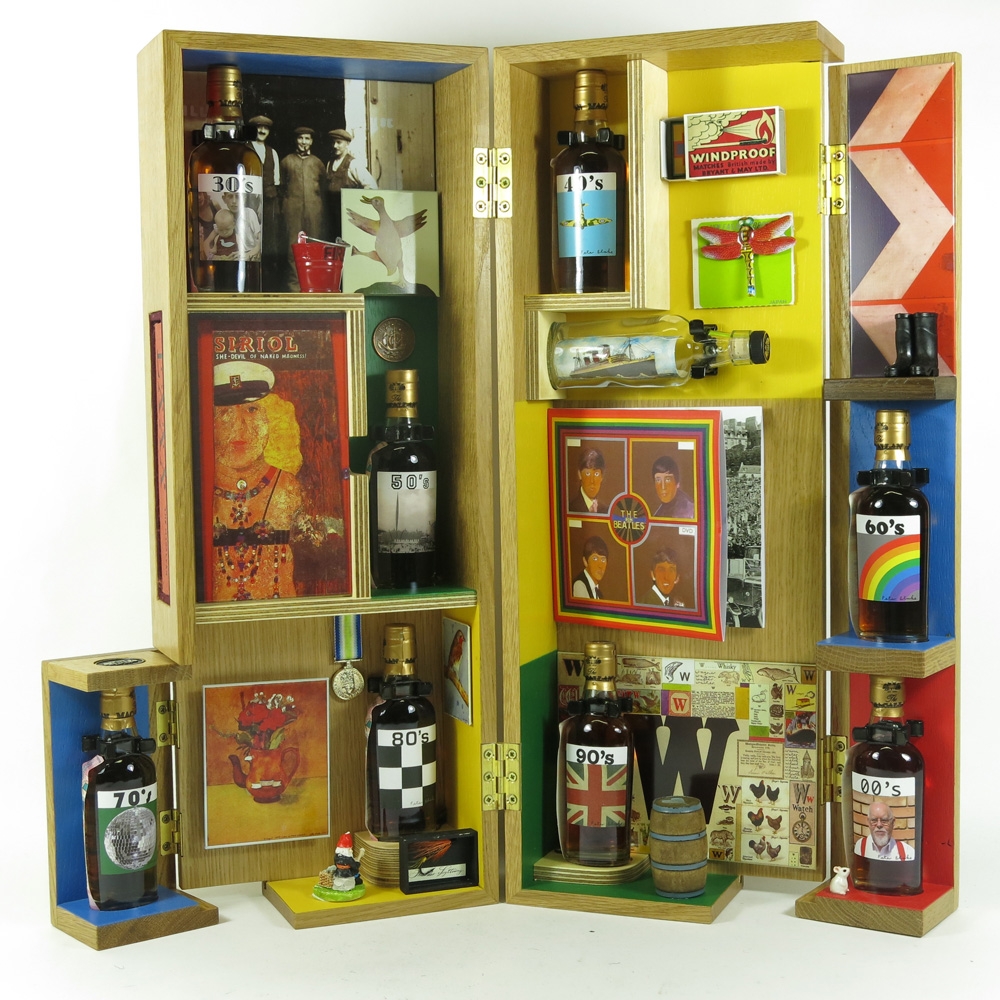 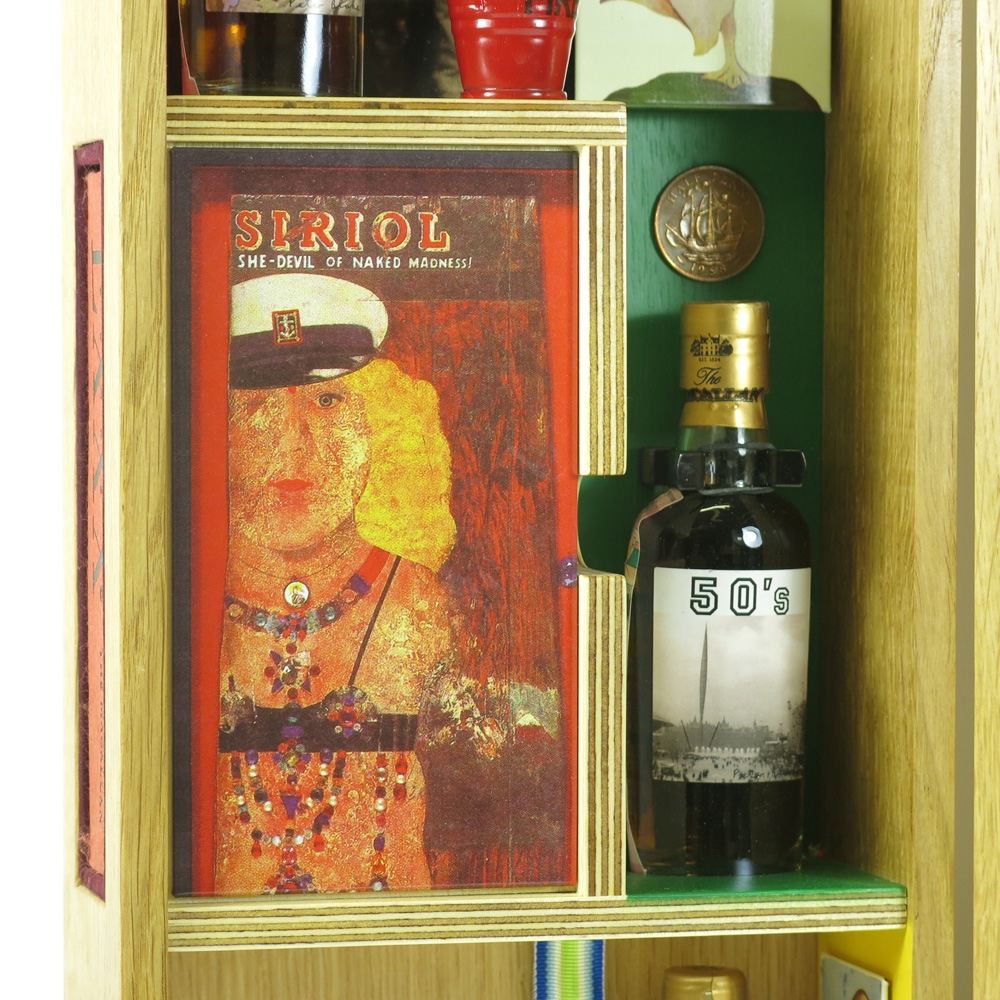 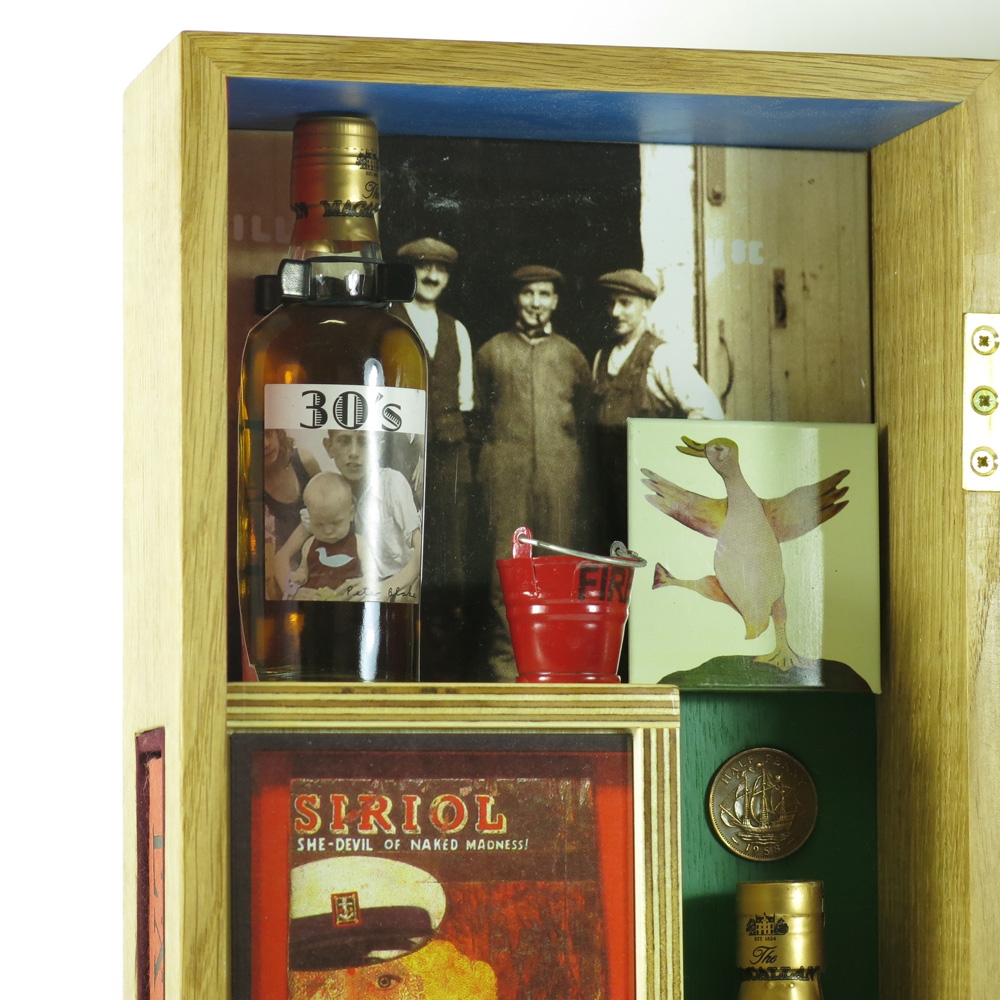 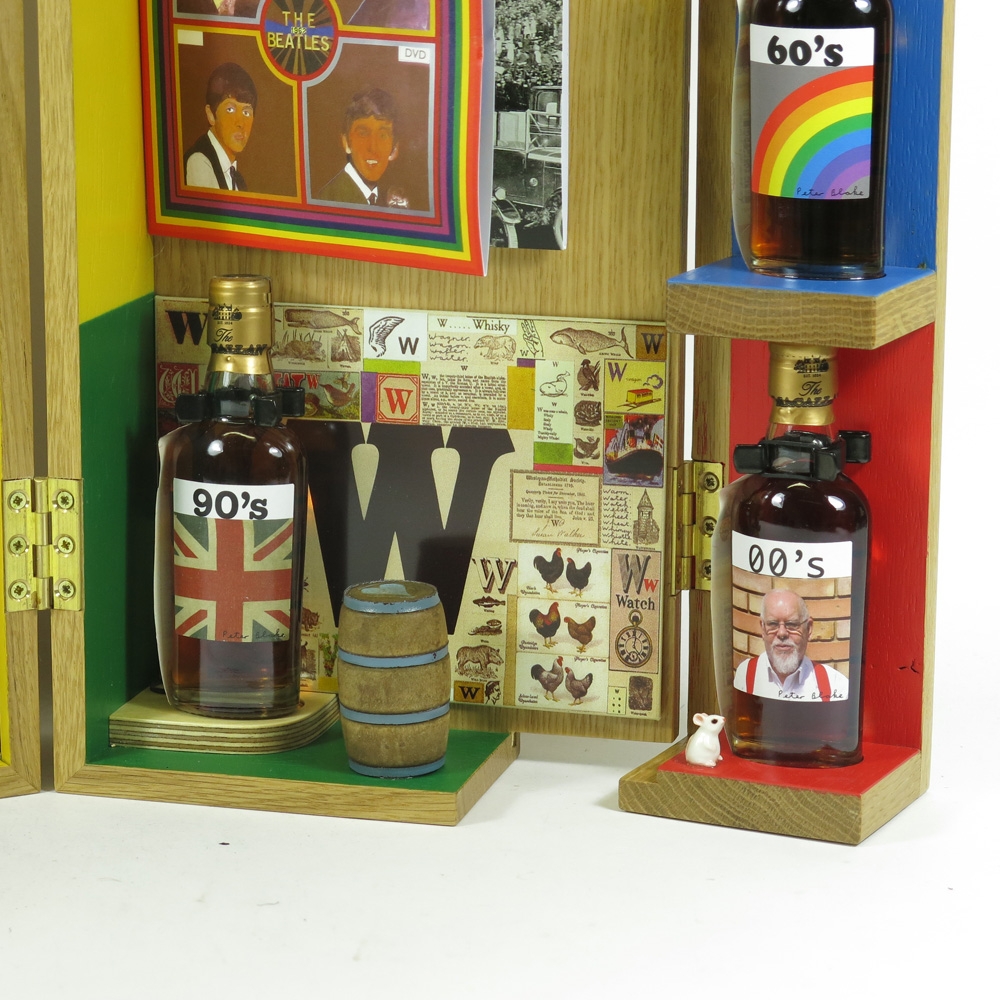 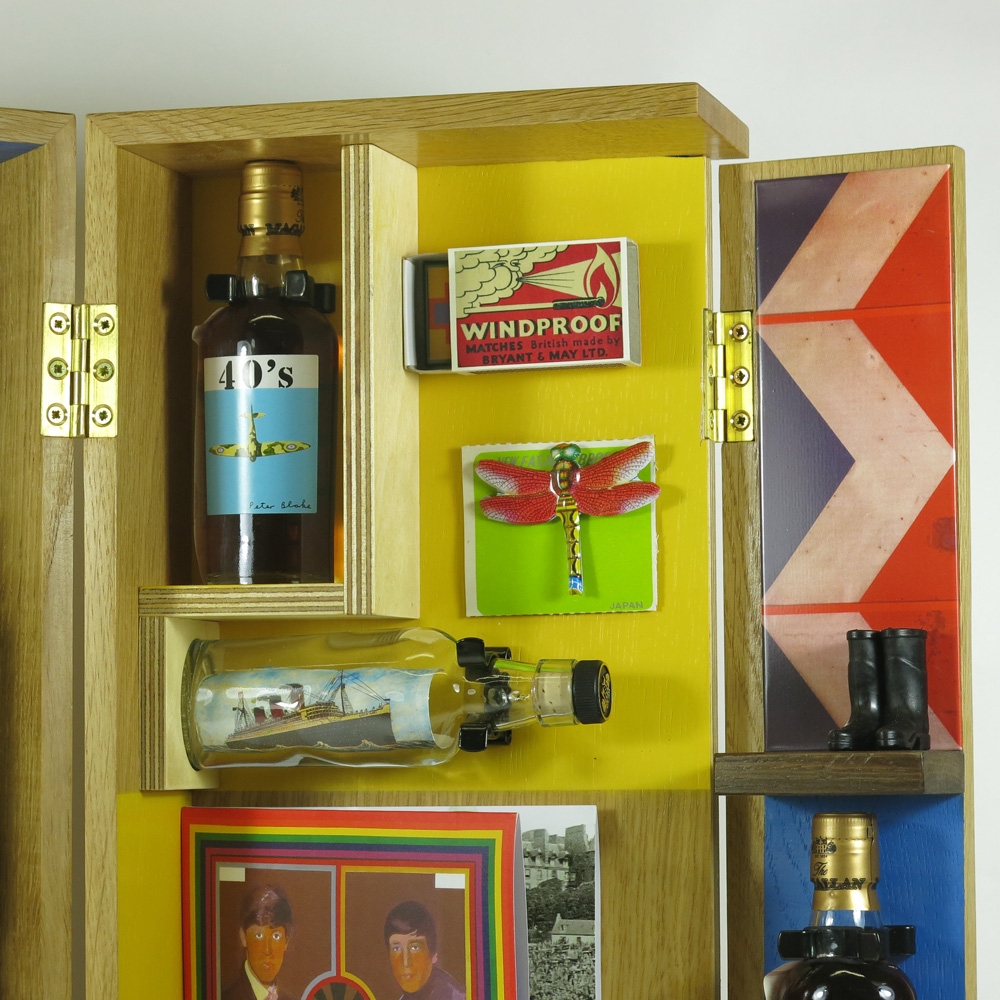 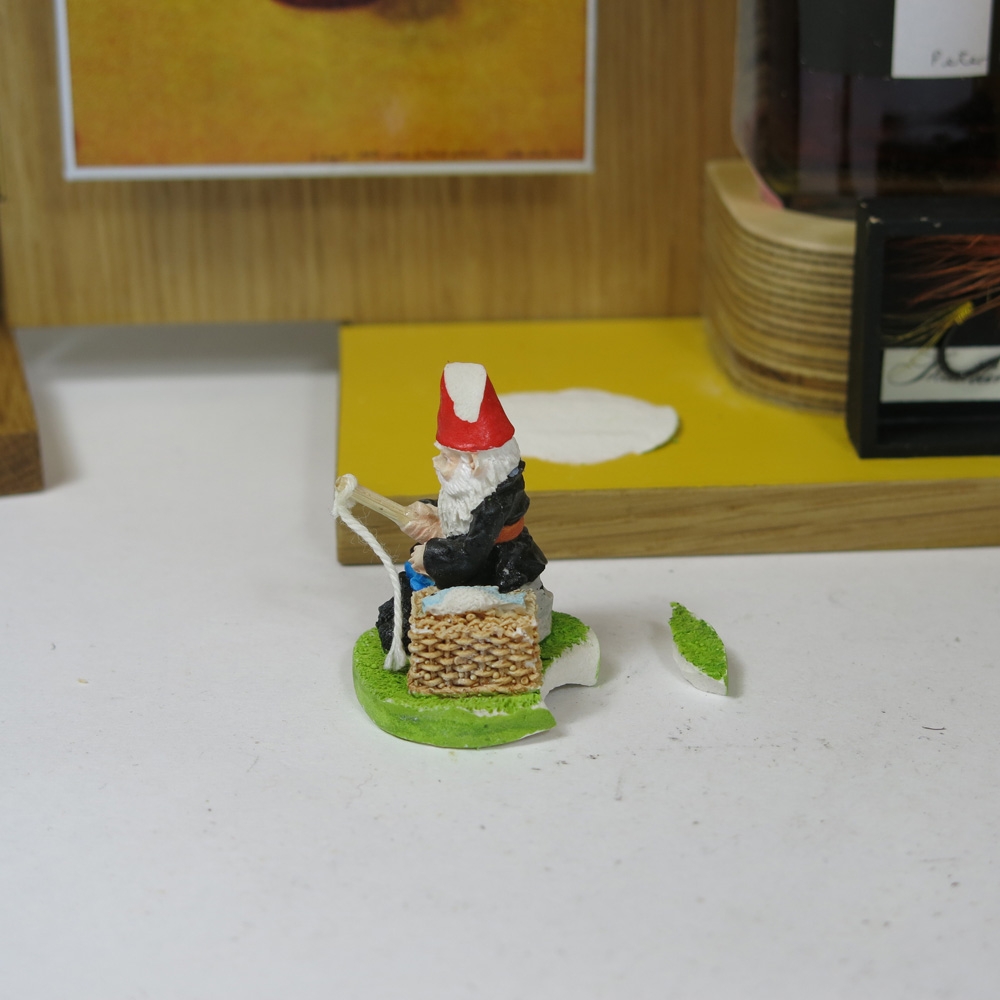 This stunning presentation art piece from Macallan is in celebration of Sir Peter Blakes eight decades. This art work and selection of whiskies was released to coincide with Sir Peter Blake's 80th birthday.

Sir Peter Blake has worked with Macallan on numerous projects, including designing the label for the highly collectable Macallan 1926, back in 1986.  He worked alongside designer David Holmes on their earliest advertising campaign, and was the creative mind behind the William and Kate Royal Marriage and the Queen’s Diamond Jubilee bottlings.

This art piece follows Sir Peter's designs for eight labels representing each of his eight decades.  Working with a team of highly skilled specialists – a fine cabinet maker, a typographer, a writer and art director he inspired and chose several artefacts and backdrops for the art piece to create a true celebration of his life and the Macallan.

The presentation piece consists of a stunning oak box which opens into a display divided into eight sections representing eight decades.  Each section includes one or more artefacts relevant to the decade and a miniature distilled in that decade baring the label designed by Sir Peter.

Further items to note are a book of illustrations, and text about Sir Peter Blake’s life, and the Macallan which is printed on Japanese paper.

Their are eight miniatures in total and they cover every decade from 1930 to 2000. Many (not all) of these vintages are chosen from single malts taken from the Fine & Rare collection through the decades including the oldest from 1937, to the youngest at 2002.

The artefacts chosen represent the four elements of water, fire, air and earth as a direct connection to our whisky making process.

Please note damage to the Gnome character in the bottom left section of the piece, as shown in the final image. 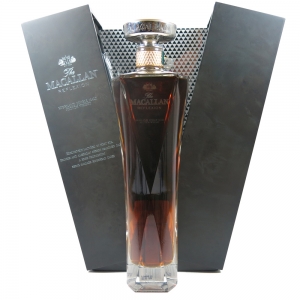 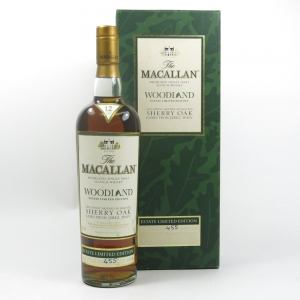 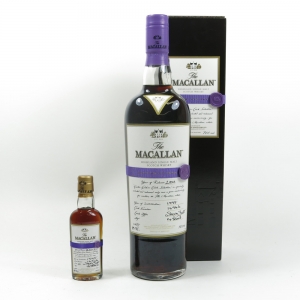 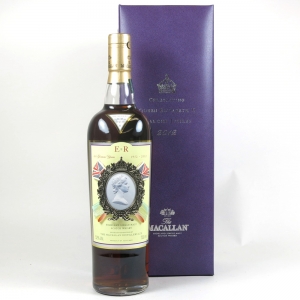