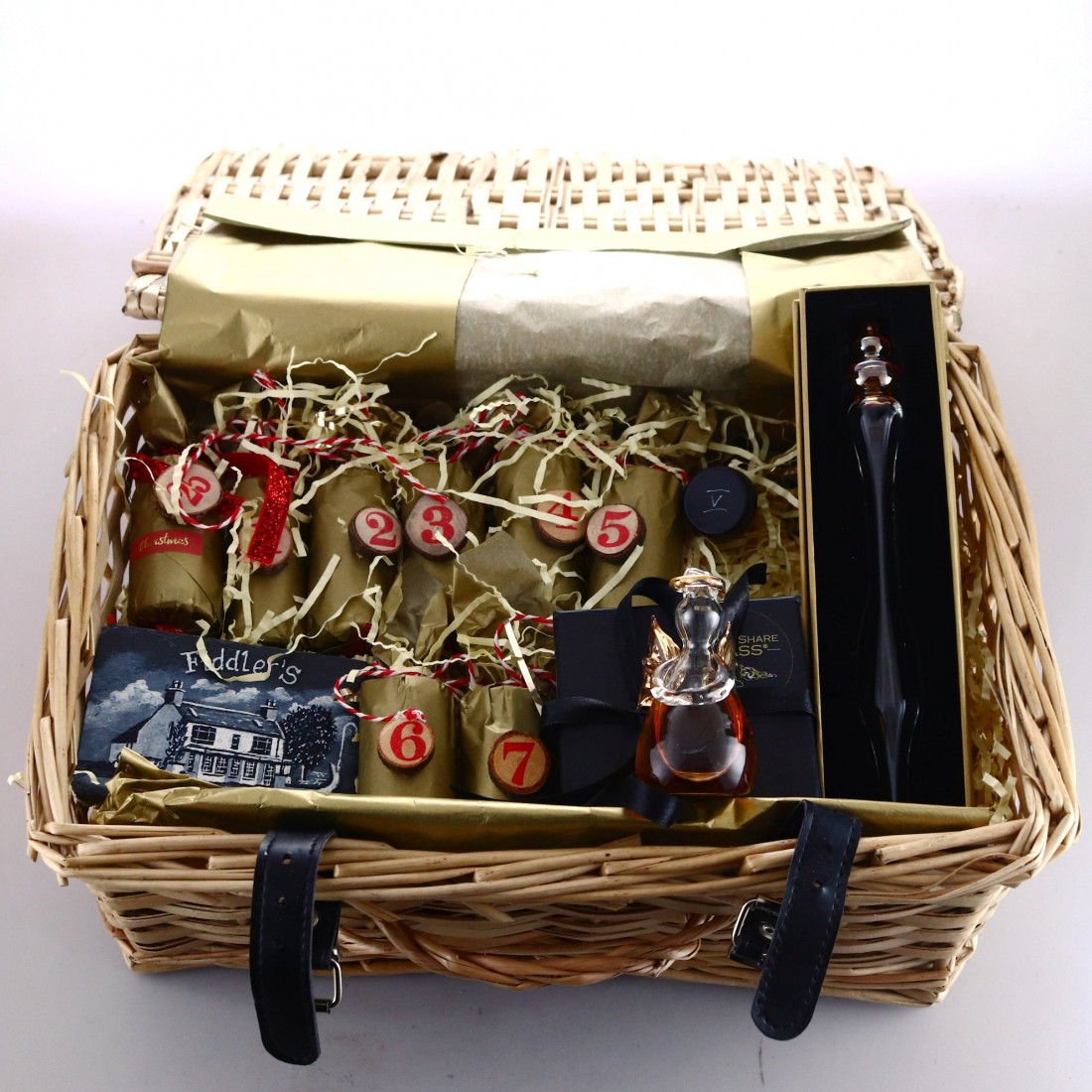 From the shores of Loch Ness comes this basket of delights from the Award-wining Fiddler’s Whisky Bar, it was a very different year for the reigning SLTN Whisky Bar of the Year and many of their regular customers from Scotland and the rest of the world were not able to visit so the chaps at Fiddler’s have decided to package up twenty-four delicious Whiskies from their overflowing shelves and send a bit of Fiddler’s Whisky Love out to the world. Included in this selection are some of the exclusive Independent Whisky Bars of Scotland Whiskies, all three of the closed Inverness distilleries and many other delicious whiskies all listed below. Each 25ml pour is numbered but not labelled so that you can enjoy your advent drams blind if you wish but don’t worry there are full details of the drams with their corresponding numbers included in a separate list.

For you to enjoy on Christmas Day there is a very special dram of Vatted Port Ellen Single Malts. This super-vatting was put together on the Mythical Islay Odyssey tour of 2015 and contains Port Ellens from every vintage available from 1969-1983 as well as the 2008 Feis Ile single cask Port Ellen and the Legendary Queen’s Visit Cask. Alongside your Christmas Day dram is an Angels’ Share Glass Whisky Angel containing another dram of the Port Ellen Super-vatting for you to keep forever.

To help you enjoy your advent drams there is also included a Fiddler’s branded Glencairn Jug and glass set with an Angels’ Share water-dropper.

Together with these wonderful gifts are included three-nights Bed & Breakfast for two at Fiddler’s with £200 to spend on Food & Drink. During your stay there will be two VIP distillery visits for two organised to two Northern Highland Distilleries with a three dram line-up of Old & Rare Whiskies from those distilleries.

Below is the list of the twenty-four drams that are included in the calendar, if you would like to know more about them or have any other questions about this lot please send an e-mail to info@fiddledrum.co.uk