The Balvenie was built by William Grant in 1892 and remains part of his family's company to this day. In the early part of its history, its purpose was primarily for the provision of malt for Grant's blends, however following the global success of Glenfiddich, The Balvenie single malt brand was launched in 1973. It remained a rarity though, and it was not until the opening of Kininvie in 1990, and later Ailsa Bay in Girvan, that the distillery was given the freedom to focus on its single malt. Today it is one of the best recognised brands in the world.

The Balvenie is a truly unique distillery in Scotland, one that still grows its own barley, uses traditional floor maltings and keeps both a coppersmith and team of coopers onsite. The invaluable skill and expertise of their craftsmen is also undeniable, with The Balvenie Malt Master, David C. Stewart MBE, recognised as the longest serving malt master in the Scotch whisky industry.

In 2010, The Balvenie released Tun 1401, an exclusive bottling only available at The Balvenie distillery. The Tun 1401 range was steered by David C. Stewart MBE, who selected some of his favourite and most precious casks across a variety of ages from their warehouses to ‘tie the knot’ so to speak.

Marrying whiskies together is when distinct malts are introduced to one another in marrying vats, also known as ‘tuns’. A marrying vat, or tun, is a very large oak vat used to blend together different casks of whisky. The time that malts can spend ‘getting to know’ one another in these tuns can vary drastically, from just a few hours to a number of months. In the case of the Tun 1401 range, The Balvenie marry the contents for approximately 3 months in marrying tun 1401, from which the whisky takes its name.

At the time of its seventh release and speaking of the traditional and labour intensive process of transferring the casks into the marrying tun, David C. Stewart MBE said:

"The way we transfer the whisky from each of the casks into Tun 1401 is also always a memorable experience. It could be done quickly using a machine, but we like to use a lovely old pump that is operated by hand – it takes a while (here's a link of the process on The Balvenie's YouTube), but we’ve also maintained the tradition of doing it manually. The pump has been used at the distillery for more than 50 years, even longer than I have been here!"

It is through his years of experience that David C. Stewart MBE is able to work with such varied liquids (imagine the nuances in each palette, polarity in maturities and deviations in ABV) to bring together all of the best elements and individual characteristics of each cask; a synergistic effect that creates a single malt of incredible richness and complexity.

After launching the inaugural Tun 1401 in 2010, The Balvenie went on to produce nine different releases, each a complex marriage nurtured under the watchful eye of David C. Stewart MBE . Ever since their first distillery exclusive batch, the Tun bottlings have become legendary with whisky enthusiasts. The Tun 1401 range is now discontinued, with Tun 1509 replacing the series in 2014. Tun 1401, however, remains a collector’s favourite with earlier batches now achieving thousands of pounds on the secondary market

Interested in the detail? Download our table which features all of the nine Tun 1401 releases, including release dates, bottle counts and more. 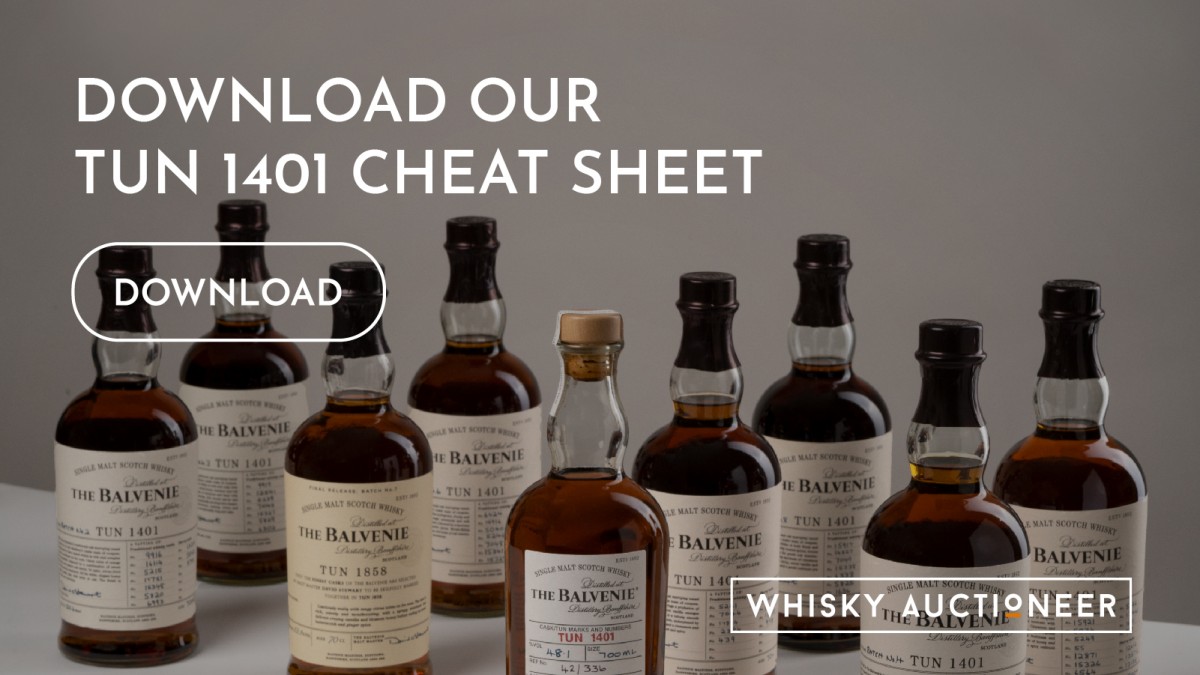 Caperdonich Distillery: Uncovering the Secrets of Speyside
A focus on one of Speyside's most elusive lost distilleries, Caperdonich, as the largest collection of bottles from the vanished distillery come to auction.
2
0

United States Imports: A Spotlight on Whyte & Whyte
Head of Auction Content, Joe Wilson, discusses the love for single malt across the pond and the Chicago-based firm, Whyte & Whyte..
1
0