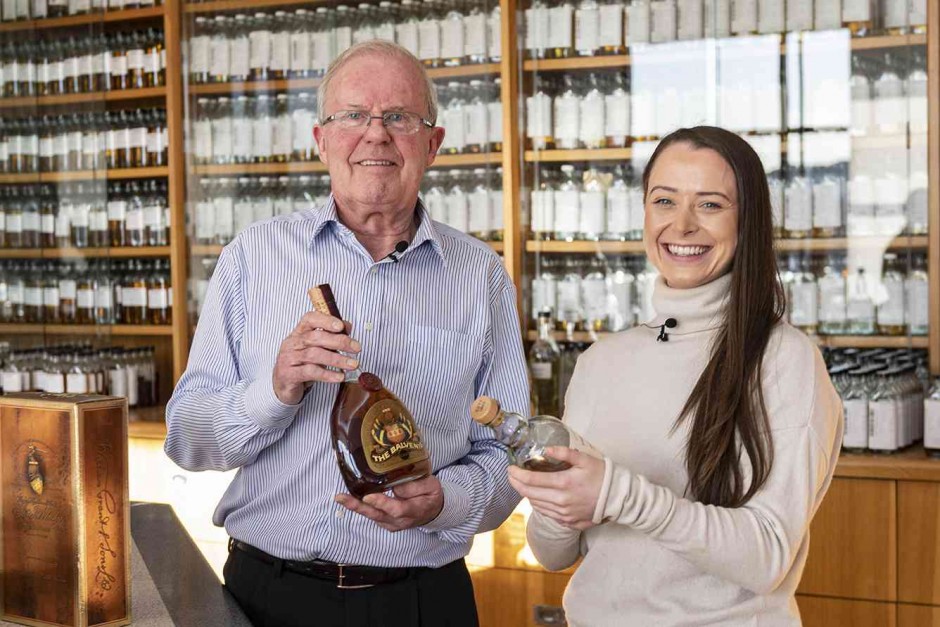 David Charles Stewart MBE is the longest standing Malt Master in the Scotch whisky industry. David started his career at William Grant & Sons as a Whisky Stock Clerk in September 1962, before embarking on a 12 year apprenticeship to take on the role of Master Blender in 1974. In 2010 his apprentice, Brian Kinsman, succeeded David as the sixth Master Blender in William Grant & Sons, however, since then he has continued with his position as Malt Master for The Balvenie.

Gemma Paterson joined William Grant & Sons in 2014 and was initially responsible for hosting visitors from around the world and their distilleries in Dufftown. In 2016, Gemma moved from Speyside Stateside to travel across the US sharing whisky stories as a Balvenie Ambassador. She has the wonderful opportunity in 2018 to take her stories global in her position today as The Balvenie Global Ambassador.

The Balvenie is a truly unique distillery in Scotland and is one which conserves years of tradition in their whisky-making process. We asked both David and Gemma what they believe are the defining characteristics of The Balvenie that have built their global reputation.

At The Balvenie we pride ourselves on the craftsmanship that goes in to making every single bottle. We are dedicated to the craft of whisky making, from maintaining a home farm where we have grown barley for generations and malting in our traditional floor maltings, to relying on our onsite coopers to tend and maintain every barrel and employing a full time coppersmith to tend and maintain our stills.

Echoing what David said, we're proud to be connected to the whole whisky making process on site from grain to glass. Every bottle tells the story of a whole team of craftspeople who have dedicated decades to making our whiskies. The epitome of this is David himself who this year is celebrating his 58th year with us.

When I started as Master Blender in 1974 we had just one expression of The Balvenie, and today we have over 20. The range is made up of a selection of finishes, e.g. DoubleWood, Caribbean Cask, PortWood (my personal favourite), Single Barrel bottlings, The Stories Series, Tun and the DCS Compendium as well as vintage bottlings up to 50 years old. Every whisky has been carefully and purposefully curated to ensure there is something for everyone to explore within the entire range.

All the whiskies David mentioned are unique and when it comes to collecting, particularly in the case of our more vintage casks or the experiments conducted to create our Stories series, each one is a snapshot of our liquid history bottled, something that can never be recreated exactly as they are bottled today.

The Balvenie 1937 Pure Malt is an incredibly rare single malt whisky. It is a vatting of four casks, each imparting their own unique qualities. Upon bottling in 1987 just 500 bottles were produced with 140 of these being exported directly to the Japanese market. Such vintages were virtually un-heard of at this time and today offer a chance to own a true piece of whisky history. We asked David and Gemma to share some details on the story behind this special bottle.

I remember the day well when I received the samples from these casks to nose and approve. Jack Milroy visited the distillery with family member Peter Gordon to take a look at the distillery when they came across these rare casks, we really didn't know a lot about where the wood came from back then but the whisky held within the casks was exceptional. The agreement was made that they would be bottled and sent on to Milroys to distribute exclusively. At that time in the industry it was rare to look at samples of such an age and really was something exceptional to be a part of. 1987 saw this first ever bottling of a 50 year old Balvenie, and we wouldn't see another one until 2001. I would say this is one of the most collectible Balvenie's in the market.

I've always been so intrigued by this bottling. Whilst conducting some research a number of years ago I came across a newspaper clipping in our archives announcing the release and heroing the craftsman who had filled the cask back in 1937. The very same man hand filled every 500 bottles the casks yielded 50 years later In 1987. A detail that has always stuck in my memory!

Are you able to provide insight into the production techniques used at The Balvenie at the time this was distilled? Have these changed significantly to those used today?

Back then the main difference in production would have been the way that our stills were heated. In 1969 we moved from coal fired to steam coils aside from the principles of the way we make our whisky are much the same. I've been lucky enough to nose samples of The Balvenie from the very early years through to the present day and my main role is working to ensure that we maintain a consistency in character throughout.

We are incredibly lucky to have David's nose! We calculated that David has nosed more than 400,000 cask samples of The Balvenie in his career, every single one as unique as a fingerprint, a snowflake and each imprinted on David's sensory memory. No one else in the world has or will ever have this kind of knowledge of The Balvenie so when it comes to these older bottlings his experience is something very special indeed.

Have you tried liquid of a similar vintage yourself and if so, can you share anything about it and the experience surrounding that tasting?

I’ve been incredibly fortunate in my role to have been able to try the casks that made up the vatting of this vintage along with many other incredibly rare whiskies. Balvenies of this age are unforgettable, delicate, elegant and incredibly complex. The perks of being the Malt Master means I hold the keys to all of our warehouses.

A truly unique bottling of The Balvenie from Cask #4194. At first glance, this bottle could be easily mistaken for The Balvenie’s 1961 Vintage Cask 38 Year Old, however, this is in fact a rarity bottles form the same cask at 36 years of age. On 1st September 1997, some whisky was drawn from Cask #4194, originally laid down I June 1962, and hand-filled into a singular bottle.

The Balvenie 1961 Vintage Cask, 1 of 1 is truly the definition of rare. Are you able to shed any light on how this unique bottling might have come about?

After the success of the first bottling, the 1961 followed a few years later with 141 bottles yielded from the cask in 1999, however it is remarkable that Mr Gooding has a 1/1 bottling from this very same cask released a few years previously. Most likely a cask we had our eyes on for its exceptional quality for quite some time. For anyone investing in these bottles it would be most interesting to compare them side by side.

Can you provide any insight on the wider Vintage Cask series and perhaps any particularly rare or significant expressions?

The 1951 cask 1236 was bottled in 1996 and was one of the very first casks as part of this range that was released, a small bottling of only 90 bottles. The bottlings from 1966 are two from a series of 66 vintages. Cask 1896 was distilled on the same day as 12 others and cask 6425 had four siblings bottled as vintages from 1997 until 1998. A batch of exceptional casks that were of the rare quality we expected for these vintage bottlings.

Our records show that some of these casks lay side by side maturing in the warehouse over the decades until David selected them and sent them on their way for bottling. I love the fact that they have the opportunity to be reunited again perhaps in a collection. Whiskies of these age and quality really represent a small "drop in the whisky ocean" and that is something so rare indeed.

Can you tell us more about the aim of the Vintage Cask series and how each of the whiskies are selected?

I used to travel to the distillery a couple of times a year with the sole purpose of selecting these vintages which were always all over 30 years old and a combination of American Oak and Spanish Oak. We would typically identify six good quality samples of a similar vintage and decide together on the final bottling. I have very fond memories of these times as we partnered with various experts from different fields across the country to assist me in the selection process. For example The British Beekeepers Association, Customs and Excise, whisky writers…. it was a wonderful experience that gave us insights and shared expertise from various craftspeople across the country.

These collaborations from over twenty years ago still continue to inspire us today in the way that we bring The Balvenie to life, championing ultimate craftsmanship across the world and supporting makers to pursue their crafts.

What does the series offer a collector?

As we have demonstrated above, like every limited bottling out there the series offers a collector the opportunity to own a piece of The Balvenie history that we can never recreate. Exploring the bottlings and rediscovering their stories has brought back many fond memories for me which I’m thankful to have had the opportunity to explore.

The series offers a great deal to any collector. Each one of these bottles tell a story. A story that starts with provenance, craftspeople, casks, David, collectors like Mr Gooding and ends with the whisky in a glass in someone’s hand. It’s incredible to see this collection and the stories that each of the bottlings tell. Thanks to the collection we are telling them to another generation. 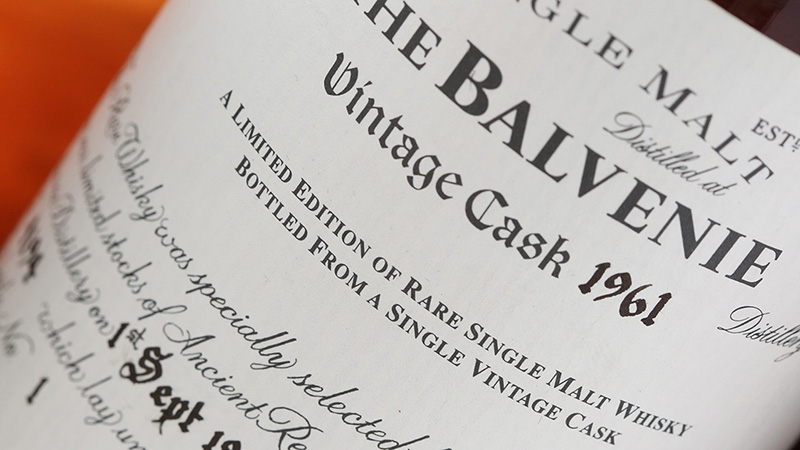 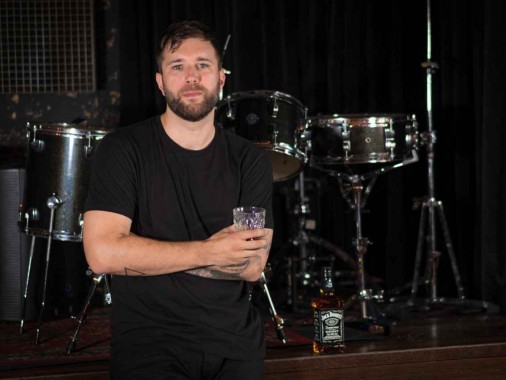 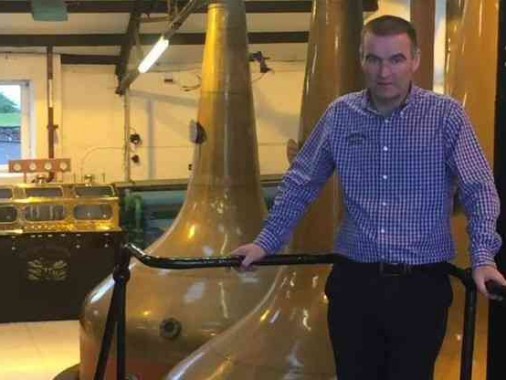 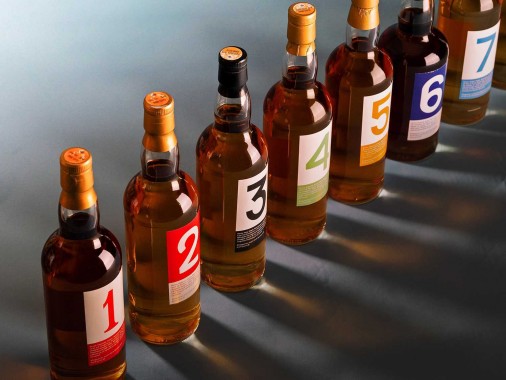 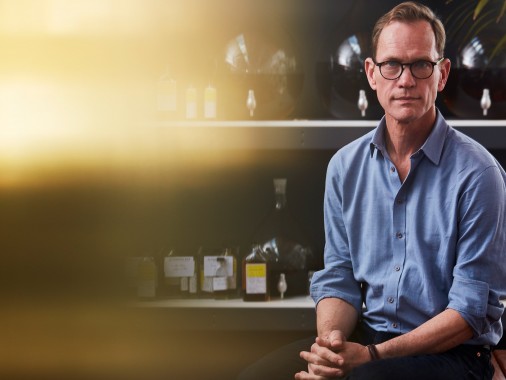 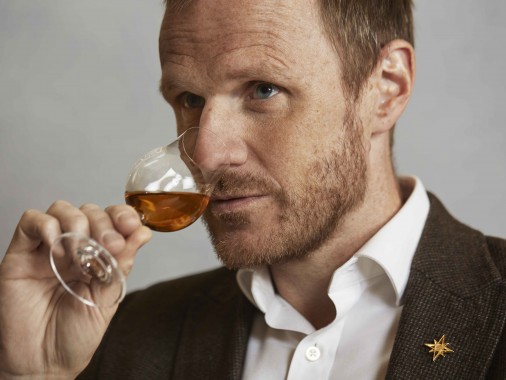 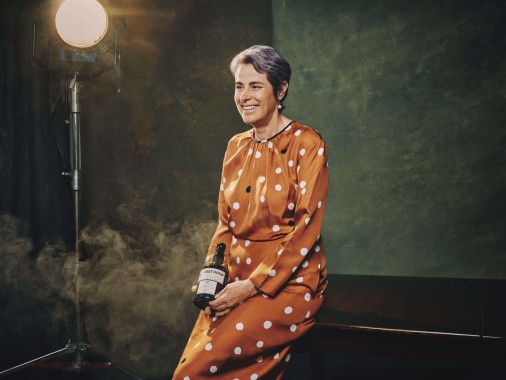