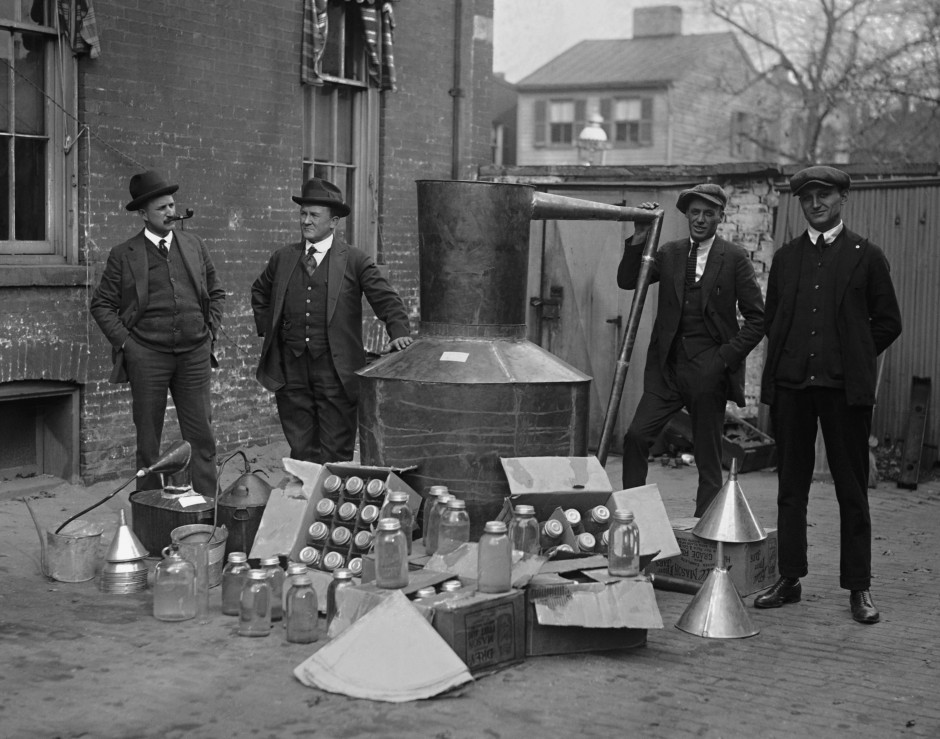 In the 19th century, the main package distilleries used to sell their whiskey in was the barrel. It was not until the 1890s that bottles became machine-blown and economical for distilleries to bottle their own whiskey. Before the 1890s, bottles of whiskey were produced by the secondary market of liquor merchants who carried brands for the distilleries. Consumers often brought their own bottle, jug or flask to these merchants and had them filled straight from the barrel. By the beginning of the 20th century, distilleries were bottling their own brands of whiskey. The Bottled-in-Bond Act of 1897 and the Pure Food and Drug Act of 1906 defined such things as “straight whiskey”, “blended whiskey” and “compound whiskey” and set regulations for the labeling of these products.

Prohibition came into effect in January of 1920 and changed the rules. First of all, only six companies applied for and received licenses to sell “medicinal spirits”. The other distilleries were left with few choices. They could either sell their barrels of whiskey to one of these six companies. They could contract with one of these six companies to bottle and sell their whiskey for them, paying a fee to that company for storage and bottling, plus a commission on the sales. They could hold on to the ownership of the barrels, but move them to a government licensed “consolidation warehouse” and try to wait out prohibition. Or finally, go out of business and sell everything – barrels of whiskey, trademarked brands and the distillery. All four options were used by most of the distilling companies during prohibition.

This means that the whiskey in a prohibition era bottle may or may not have been distilled by the company who created the label. For example, the A. Ph. Stitzel Distillery and W. L. Weller & Sons (the same three men owned both companies) started prohibition with the brands Cabin Still, Mammoth Cave, and Weller. They became a consolidation warehouse and had a license to sell medicinal spirits. They sold on commission the brands Old Charter, Waterfield & Frazier, Henry McKenna and Geo. A. Dickel’s Cascade whisky. They purchased the whiskey stocks and trademark for Old Fitzgerald and Old Elk. These brands started with whiskey that had been created for the brands, but as prohibition dragged on, they began to fill the bottles with whatever whiskey they had available. By the end of prohibition, there were very few barrels left of the original whiskeys.

All prohibition sales were required to be Bottledin-Bond spirits. The 8 year bonding period was cast aside and whiskey could be stored longer and bottled as bonded spirits after the eight year bonding period expired. Spirits (whiskey, brandy and rum) sold for medicinal use had to be sold in approved bottle sizes. Most States required the spirits to be sold in pint bottles, but a few States allowed quart bottles as well. All prohibition bottles had a green tax stamp showing the distillery that made the spirit, the distillery that bottled the spirit, the year and season that the spirit was made and the year and the season the spirit was bottled.

The First World War saw wartime prohibition that ended the production of beverage alcohol in 1918. This was extended until prohibition went into effect. The distilleries bottled and sold spirits right up to January 16, 1920, when prohibition started. Production was not started again until 1928, when the government allowed the six companies with medicinal licenses to produce spirits to replenish dwindling stocks, but this was limited to the production of only five million proof gallons a year, to be split amongst these six companies based upon the percentage of existing stocks owned by each company.

By the end of prohibition, distilleries were selling medicinal spirits that were 17, 18 or even 20 years old. The consumer found these spirits to be overaged and very tannic and considered “the good stuff” to be Scotch and Canadian whiskies that flooded the market after repeal. The result is that medicinal spirits ended up being put away in attics and basements as the drinkers purchased spirits more to their liking at the time. It is for this reason that some bottles still exist and can be occasionally found on the secondary market today.